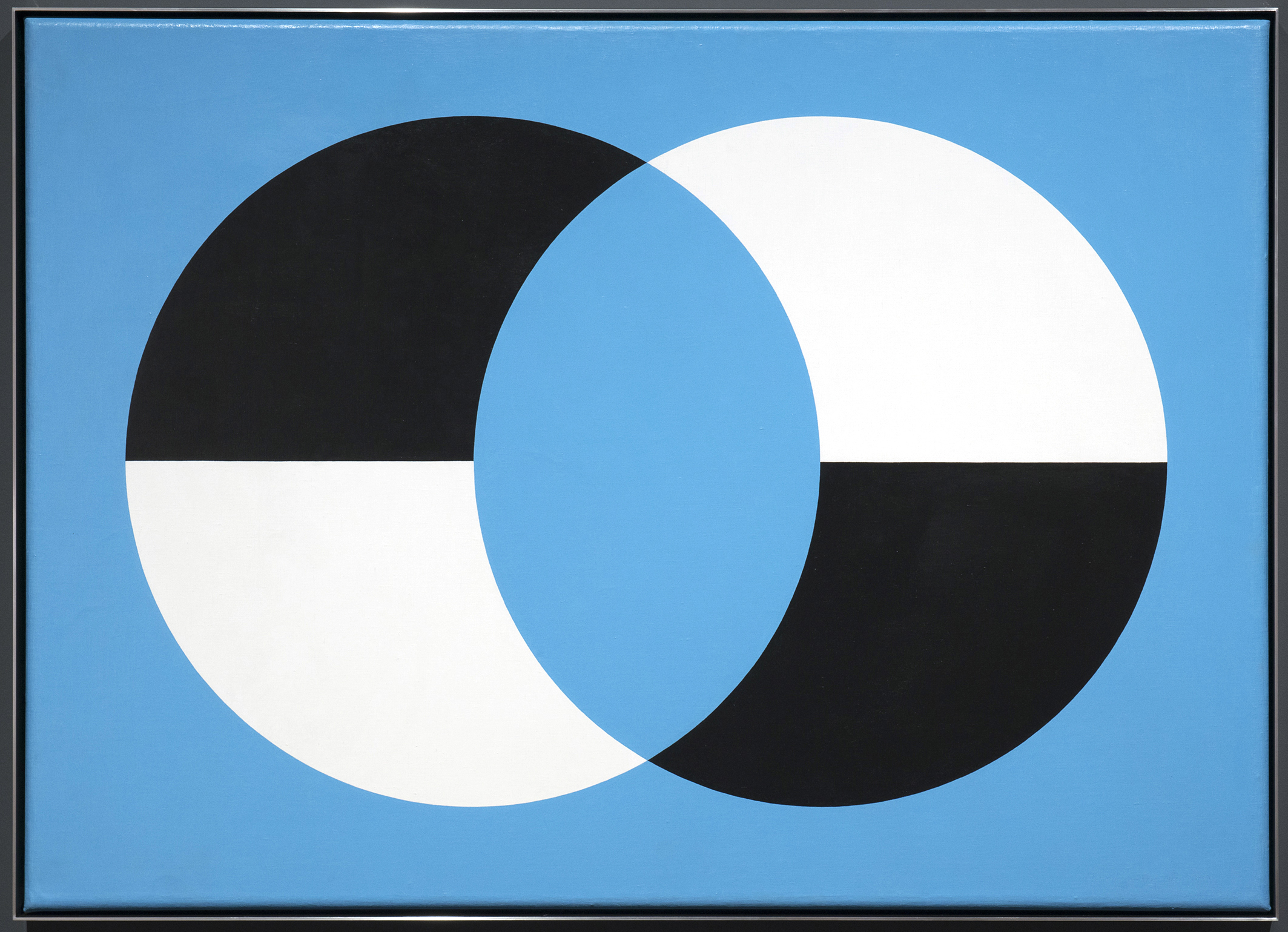 Frederick Hammersley: To Paint without Thinking, brought from The Huntington Library, Art Collections, and Botanical Gardens, showcases the American artist’s sketchbooks, notebooks, inventories, and vibrant color swatches to illuminate the systematic process he used to create his lively hard-edge geometric paintings. The presentation in New Mexico, where the artist lived from 1968 until his death in 2009, has been expanded by a dozen additional works from New Mexico Museum of Art’s collection.

The museum has had a longstanding relationship with Frederick, and holds a comprehensive collection of his artwork, from early student work, his computer drawings and punch cards, prime examples of his fully mature paintings, as well as archive materials and color studies. This carefully researched, imaginative show will be particularly well received here in New Mexico where the artist lived for the last four decades of his life. Highlights of the Hammersley archives include his notebooks and sketchbooks, in which the artist developed compositions over a period of decades. In these books, he generally used a two-stage process, first composing postage stamp-sized images—sketched out in pencil, colored pencil, or ballpoint pen—then selecting compositions to execute on a larger scale, sometimes in oil paint. “These sketchbooks served as a forum for exploration and a wellspring from which he drew throughout his long career,” said James Glisson, Bradford and Christine Mishler Associate Curator of American Art at The Huntington and co-curator of the exhibition. “It is like peeking over his shoulder to see him at work, altering a color or two, adding or subtracting a line, then moving on.”

Frederick Hammersley (1919-2009), who lived in Los Angeles until 1968, entered the spotlight in 1959 as one of the artists in the international exhibition “Four Abstract Classicists,” along with Karl Benjamin, Lorser Feitelson, and John McLaughlin.  He was unique among his peers in that the elegant simplicity of his paintings stemmed from a rigorous process of refinement that he tracked in extreme detail. His “Painting Books,” two of which are on view in the exhibition, contain dated entries for every step of the painting process, from stretching a canvas and applying multiple layers of paint to varnishing and touching up. These invaluable records outline the process and materials he used in more than 150 geometric paintings. Such a level of record-keeping was a boon for exhibition co-curator Alan Phenix, scientist at the Getty Conservation Institute, whose essay in the exhibition catalog describes Hammersley’s paintings from the technical perspective. Phenix observes, “I doubt there exists anywhere such a large group of paintings that is so fully described from the material and technical point of view.”

“Frederick Hammersley: To Paint without Thinking” also includes 45 of the experimental lithographs made in 1949, a pivotal moment when Hammersley had reached an impasse with traditional painting and turned to the exacting medium of stone lithography. He taught himself the complex lithography process, pulling prints on the weekends at the Jepson Art School in Los Angeles, where he was teaching. Numbering in the hundreds, these prints each measure 3by-3inches, and consist of a 4-by-4 grid with 16 squares.

In 1968, Hammersley reached another “dry spell” in his painting activity and moved to Albuquerque, New Mexico, to teach at the University of New Mexico. Shortly after arriving there, he learned Art1, a computer program written by Richard Williams and among the first programs designed for visual artists. Using punch cards, a then-state-of-the-art IBM 360/40 computer, and a tractor-fed 1403 IBM line printer, Hammersley made hundreds of “computer drawings.”

While the interlude with computer art did not obviously  change how Hammersley approached his geometric paintings, the Painting Book entries became much more detailed. Glisson speculates  that the artist’s step-by-step recording of  his paintings  was a result of mastering Art1’s complicated instructions for punching holes in data cards to generate shapes and patterns. “Just as chess and checkers have rules but the rules don’t dictate how a game unfolds and ends,” Glisson said, “Hammersley’s rules and systems didn’t predetermine the outcome of his work. For Hammersley, the concept of “painting without thinking” was a grey area between pre-determination and pure chance where he felt unburdened enough to explore and invent.”

The Huntington has published Frederick Hammersley: To Paint without Thinking (ISBN 978-0-9986817-1-9), a boldly illustrated catalog accompanying the exhibition and edited by James Glisson, Bradford and Christine Mishler Associate Curator of American Art at The Huntington, with contributions from Alan Phenix, scientist at the Getty Conservation Institute, Kathleen Shields, Executive Director at the Frederick Hammersley Foundation, and Nancy Zastudil, Administrative Director at the Frederick Hammersley Foundation. Distributed internationally by DAP and retailing for $35, the catalog has 120 pages and 75 illustrations. Available at thehuntingtonstore.org.